The Dunns of Sedgley, Dudley, Staffordshire.
by Alaska. 7 days ago

Cakemore Colliery
by Alaska. 7 days ago

A Bit of Genealogy.

Being so far from the Sea, you would have thought the Black Country wouldn't have much of a link with Naval matters, but you would be wrong. The Navy was always short of manpower, and during times of economic stress, lack of work, and money, the Region was a fertile recruiting ground. Parties of smartly dressed Marines, resplendent in their bright red uniforms, shoes polished, flags flying, and led by fife and drums, regulary toured the Hamlets and Townships of the area. Consequently, the crew lists of ships, from many battles, contain familiar names from throughout the midlands, Trafalgar being no exception. Some had served for years, some were raw recruits, some survived, some were wounded, others less fortunate, died. There are over 100 men who took part in this battle from the area. Not all are listed, either in the awards list, or the dead list, as many records have been lost over time. Nearly 500 were killed at Trafalgar, and over 1,600 wounded, so, if your relative was an Officer, you may find him in Genuk's " Trafalgar Roll ", which is online, and free to use. If not, I have listed, from each area, some names from the crew lists, that had the town they came from recorded. There are many books on the battle itself, and many paintings of the subject, so I have selected just the one the image below. 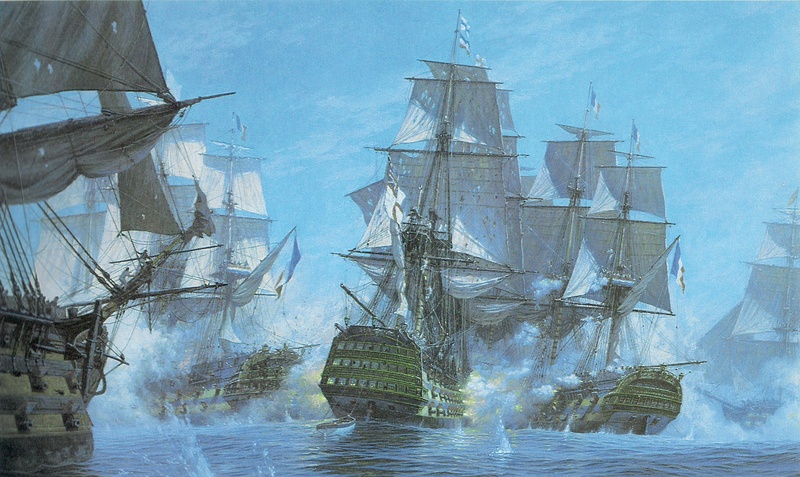 Victory, ( center ) engaging with the French Flagship Bucentaure. ( on the right )

The lists below contain the names and birthplaces or parishes of nearly 70 men. Most of them were Royal Marines, some of whom would have manned the heavy guns during battle, as well as providing guards, ( not the done thing to run away and hide below decks ) and boarding parties, should the need arise. There are a few proper seaman amongst them as well, a sign of length of service, and a few Landsmen. ( not yet a sailor ) The Ships they served on, range from the first rates, 90 to 100 guns. second rates, 80 guns, third rates, 74 guns, and right down to the 42 gun Frigates. If you spot a family name in there that comes as a surprise, you have a search on your hands. Good luck with that, although there are a few other places to contact, the Marines have some good records, details of which you can find online. The men on the list also received an award, no, not a medal, but a share in the prize money due for the capture of enemy Ships. It varied greatly, and ranged from a few pounds, to many hundreds, obviously, depending on rank. 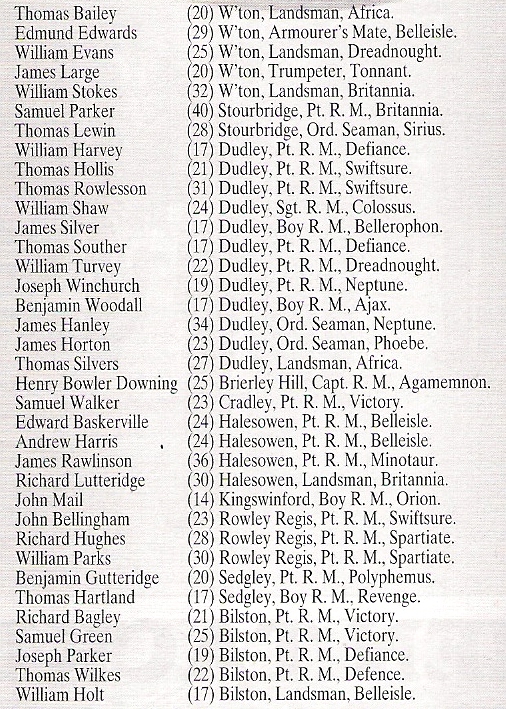 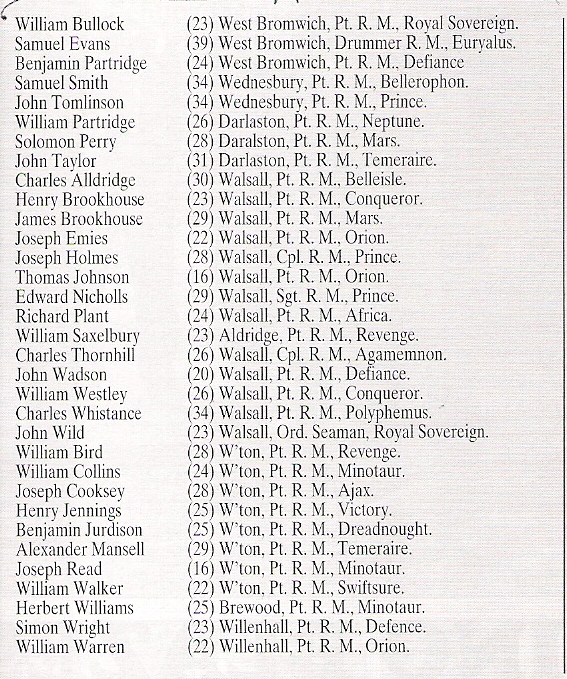 Most people will have seen the famous painting by Turner, " The Fighting Temeraire ". It's the ship that came to the aid of Nelson's "Victory", when she was hard pressed by the "Bucentuare". On board that day, was a young signal midshipman, James Eaton. He showed great courage on the day, and his reward was a naval commission. Sadly, due to ill health, he was invalided out of the service in 1814, and in 1816 he got married, Strange as it seems, she came from Cannock, so a short time later, they moved to this area. The place they chose to live was West Bromwich, as far away from the sea as you can get in our small island. He was given, for his gallant service, the honorary title of Captain, and settled down in Hill House, Daggers Lane, where he lived until his death, in 1857. Obviously, he married well. He is buried in All Saints Churchyard, not far from the main door, his Tombstone being refurbished, in 1982, by local stonemason Philip Strong. It's not just my interest in Maritime History that prompted me to include this page, it's nice to reflect, that local men, played a part in removing the threat of invasion from our shores. And it wouldn't be the last time either.