The Chainmakers of Cradley.
by Rankle search 4 months ago

Stagecoaches.
by Irvine 4 months ago

All Staffs Dance Band Championship
by Arthur 5 months ago
More...

Captain Charles Napier, ( later Admiral Napier ) was no doubt a very clever man. He also had an eye for profit, and as would be expected of a naval officer, was well travelled. Having spent time abroad, he had many spare hours in which to watch the constant flow of river traffic. He also observed all the new fangled ideas that were begining to appear. About 1820, this ambitious young officer drew up some plans for a radical new form of river transport. Steam was already in use, so his idea had to be different, and  it was, he proposed building a new vessel, entirely from Iron. Now you can imagine the ridicule this drew from some of his contempories. There was no confidence that it would do anything more than sink. Napier was not put off, so in 1821, he approached another man of vision, the Tipton born Aaron Manby. This man owned the Horseley Iron works in Tipton Staffordshire, and was already prefabricating and shipping, heavy items, such as complete Bridges. Now I don't think you can get much farther from the sea than Tipton, but if you can pack and ship a Bridge by canal, a ship should be a doodle. Napiers plans were fairly simply for Manby, a framework, Iron plates, and a load of nuts and bolts. As part of the deal, he even undertook to supply the engines and paddle wheels. All through 1821, work on the ship continued. She was to be 120 feet long, 16 feet in the beam, ( 23 feet with the paddles and box fitted ), and weighed 116 tons. ( 122 tons displacement ) Manby assembled the ship in his works at Tipton, not too difficult, as she was flat bottomed, as all riverboats were. The completed hull was inspected by Napier, and then dismantled, and loaded on barges for the trip to Rotherhithe in London. Amidst jibes that it had all been a great mistake, and when launched it would never be seen again, Manby set off for London, to supervise the re-assembly of Napiers little dream. It was no accident, that Rotherhithe had been chosen for the task, for just a mile down the road, at Greenwich, were the Marine engine works, of John Penn and Sons. Penn was the foremost expert of his day. When the basic hull had been riveted together, ( the bolts had only been used to assist in the dismantling ) Manby had cast the engine mountings, and Penn supplied a twin cylinder Oscillating Steam Engine. Now the scant records say, the boat was fitted with two engines, which to any engineers eye, would have been daft, given the shortage of space in such a narrow hull. Taking into account her future performance, it had to be a twin cylinder engine. With the engine mountings in place, the hull was launched onto the River Thames, and, suprise, suprise, she floated. She was named after the man who had built her, Aaron Manby.The crowd that had gathered, to have a good laugh were sadly disappointed, and but I bet Napier and Manby did. The Oscillating Engine was fitted next, the Boiler behind it, and then a wooden deck was laid on the cast Iron frames. Ever the seaman, Napier had specified a bowsprite to be fitted, possible the only one at the time on such a vessel. The only known drawing, shows her with a funnel 47 feet high, and no deck housings, which at the time was unusual, and no sign of the paddlewheels either. 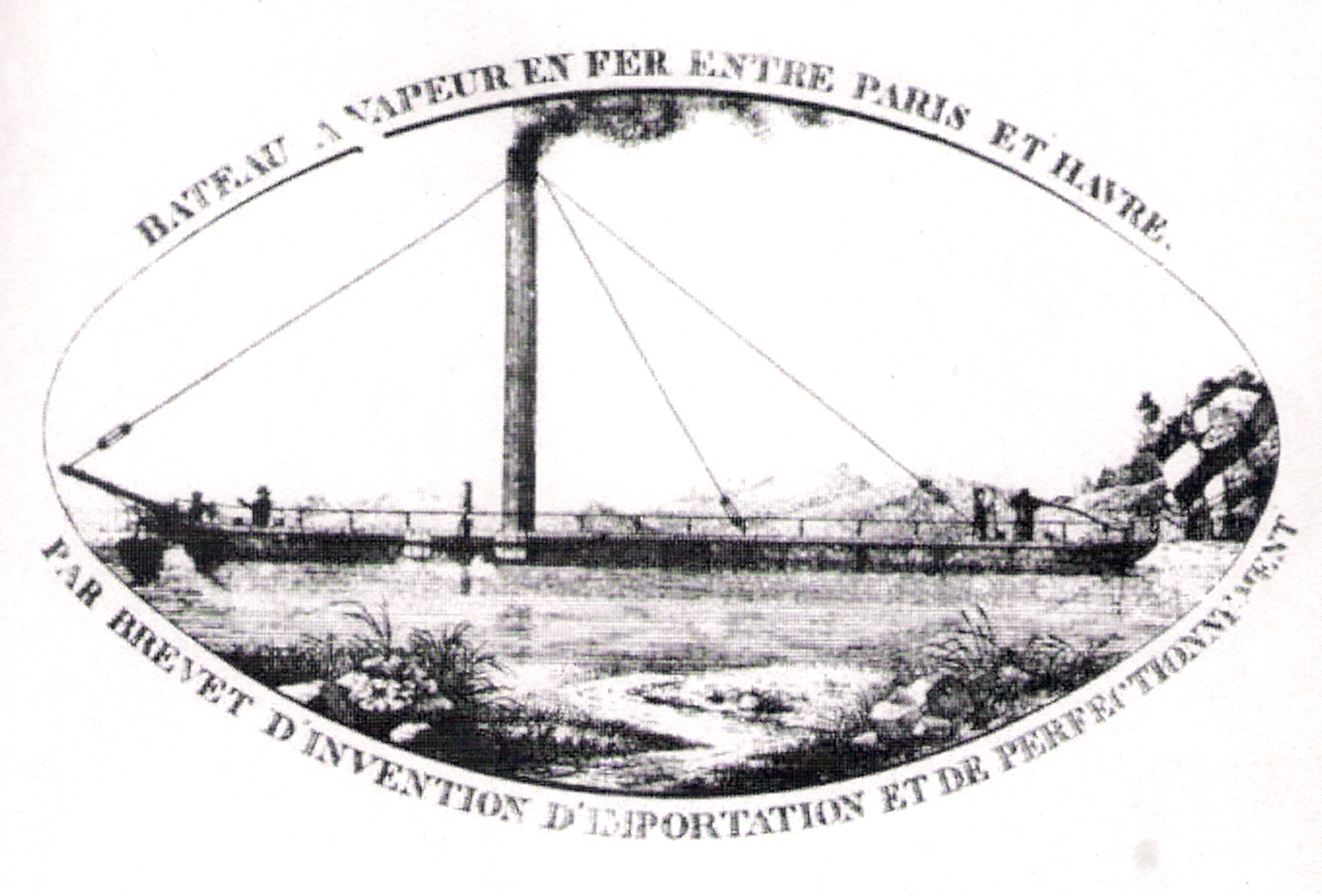 While the illustration will give some idea of the general outline of river vessels at the time, for the passenger trade for which she was purchased, there is a lot missing. Just one flush deck would have given no protection to any passengers, and carrying cargo would have persented a problem. Having looked at river craft of the time, they all had upper works, and storage space for cargo, just like our familier canal boats had. That 47 foot funnel would have impeded the boats progress on most rivers, and would have prevented her from ever reaching Paris, unless it was hinged. More likely, the Aaron Manby resembled the wooden paddle steamer " Bohimia ", which had a small deckhouse for her captain, and a cabin or saloon for passengers to recline in, safe from any inclimant weather. It was for this 175 foot long vessel, that John Penn built a twin cylinder Oscillating engine in 1841. Incorporating many new design features, it would have been a successor to the one fitted to the Aaron Manby. So good was this engine, that when the Bohimia was scrapped, it was used for a new river boat, and then, in 1884, was used in a third, " The Diesbar ", built in 1857, which can still be seen and sailed on in Germany. 170 years old, and the engine still chuffing away, now thats workmanship for you.You could say the same for Aaron Manbys other achievements as well, Horseley Ironworks products can be found all around the world. Closer to home, take a look at Galton Bridge in Smethwick, for when it when erected, it was the longest Iron span ever constructed. A great shame his Iron Hull didn't survive. 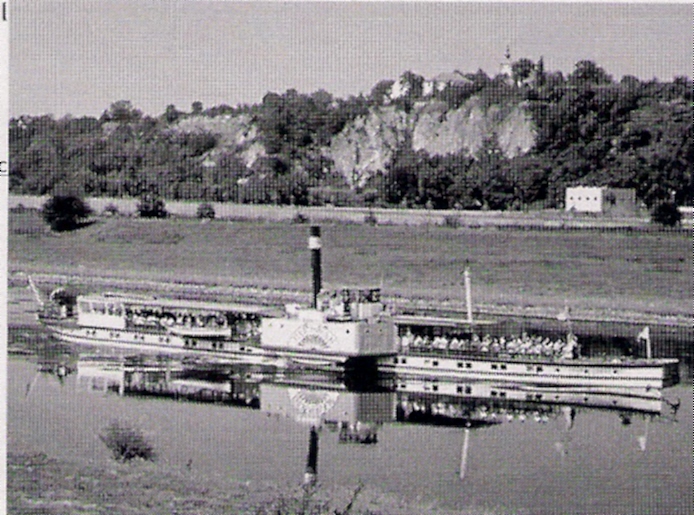 Pictured on the River Elbe, near her home town, " The Diesbar " on the Saxon Wine Route tour.

Maybe that was the French just being a bit tight-fisted with the advertising money. Having completed her trials on the river, Captain Napier now took off to her new owners, out into the English Channel and set course for Le Harve and the River Seine, a distance of over 200 nautical miles, with Passengers, Linseed, and Iron Castings, the end destination being Paris. It's believed that Aaron Manby was on board for this maiden voyage, which would have been a good publicity stunt for his business, and a chance not to miss.  She caused quite a stir when she reached Paris, and in doing so made a little bit of history. She was the first Iron ship to have braved the Atlantic Ocean, and her average speed had been 8 knots, astonishing for such a small paddle steamer in 1822. John Penn was delighted with the engines performance, and went on to make many improvements to Oscillating engines. If anyone wants to know how they work, a company in the Black Country still supply many, on model steam and traction engines, their name is Mamod. I have two of them. So Aaron Manby pioneered the way, Captain Napier went bust in 1827, and the year that he died, 1860, the Navy launched the first Iron Warship, HMS Warrior. The Aaron Manby operated on the Seine until 1830, when she was sold, and then went on to work another 25 years on the Loire, and was scrapped in 1855. Manby, and the Horseley Ironworks, went to even greater fame, supplying bridges and other prefabricated structures all round the world, a great many which can still be seen in working condition today. Under Manby, the company also constructed two Steam Locomotives, " The Comet ", in 1832, and the more advanced " Star ", in 1835. He was competing against some formidable opposition though, and the venture came to nothing, leaving just the memory behind. Still, another world records enough for now.

The above illustration gives a fairer idea of what type of paddle steamers worked on the longest river in France in the 1840s.