The Dunns of Sedgley, Dudley, Staffordshire.
by Alaska. 7 days ago

Cakemore Colliery
by Alaska. 7 days ago

On the side of the Stourbridge Canal, at the junction with Bradley and Lowndes Roads, is the long abandoned site of the old Bradley Iron Works. World famous at one time for it's high quality bar Iron, and also for producing the regions first Steam powered Locomotives. The senior partner in the firm, James Foster, who had an interest in the subject, joined forces in 1817, with John Urpeth Rastrick, to form Foster and Rastrick. The latter had worked with John Trevithick in Cornwall, and also knew Robert Stephenson. The new firm began making Boilers and stationary engines, on the same site as Bradleys. Over in America, the Delaware and Hudson Canal Company, having looked at, and approved the plans of it's chief engineer, Horatio Allen, were about to experiment with railed transport. They needed a speedy system to deliver Coal from their mines in Pennsylvania, to the wharf of the Canal they had built. They sent Allen to England in 1826, where he visited Robert Stephenson. Allen, liking what he saw, ordered an Engine, and then, following Stephensons advice, travelled to Stourbridge. The American must have really been impressed with F&Rs plans, because he ordered no less than three engines. Stephenson already had a workshop up and running, so it was no surprise, when the Engine he built was delivered two months before F&Rs. So the first Steam engine in America, Pride of Newcastle, was unpacked and stored away until the time of the companies trial, 8th August,1828. Meanwhile, Foster and Rastrick's three Engines, Delaware, Hudson, and the Stourbridge Lion were not far behind. Now the original specifications, called for an Engine of no more than 4 tons, and it was soon discovered that all four exceeded this design. The rails laid for the trial were made of wood, as indeed they were, in Allens plan for the Canal link. It's entirely possible, that Stourbridge Lion was chosen for the trial, because at 7.5 tons, she was the lightest of the four shipped. She could not though, run a trial without her tender, carrying coal and water, which meant her weight would be just a shade over 11 tons. Horatio Allen then spent some time, learning how to operate the machine, and test the rails over a short run. On the day, a huge crowd gathered at Honesdale, Pennsylvania, to watch this smoke belching monster perform. There was great astonishment, as she chuffed her way into motion, and disappeared down the track, and over the River. Bets were laid that she would not come back, but a few minutes later, now in reverse, she completed the trial with flying colours. The honour of the first Steam Locomotive to operate on American soil, went to The Stourbridge Lion. 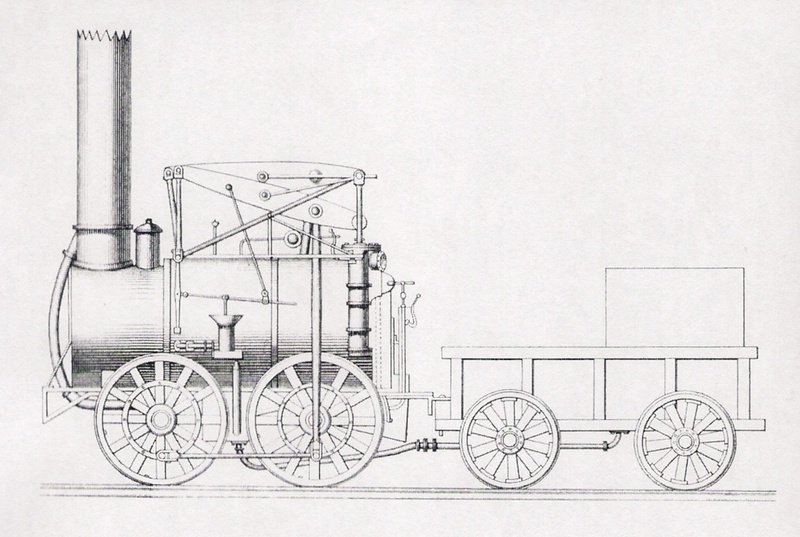 The Engine has two upright pistons, driving two walking bars, that in turn drive the two rear wheels. A connection bar then drives the front wheels. The tender carries a tank of water, coupled to the boiler intake, the coal being carried in the front section. The driving arrangement is known by the more technically minded, as 0-4-0. 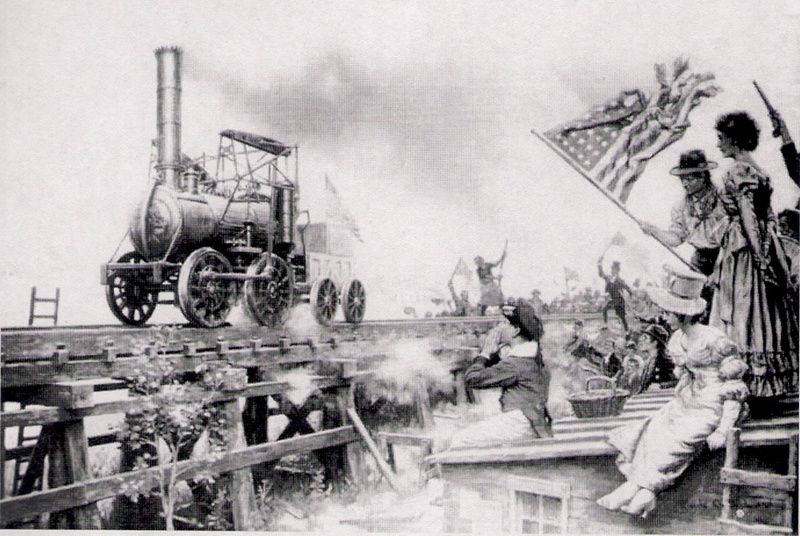 The main problem though, were the rails, they simple were not up to the weight of any of the engines. Alterations were made, but the company records do not indicate, which engine worked where, or for that matter, for how long. It may have been suspected, that the American engineers, who made rapid strides in development beyond this point, had " borrowed " a few ideas from what had been delivered. The Delaware and Hudson Canal Company certainly used some of the engines up till 1834, when it was recorded that the Stourbridge Lion had been retired. To be fair, she was obsolete the year after she and her sister engines had been made. As was Robert Stephensons engine, all because his son George, designed a better one. By a strange twist of fate, at the Rainhill Trials in 1829, one of the Judges was John Rastrick. I don't know how he felt, as he watched "The Rocket" out do every other engine, but he surely would have seen the future. Back in Stourbridge, the company made just one more engine, " The Agenoria ", which was made for the Earl Of Dudley, and ran for over 30 years, on the "Shut end line". It can still be seen today at the National Railway Museum in York. Foster and Rastrick ceased to trade in 1831, James Foster putting all his energy into his Iron Works. He was voted MP for Bridgenorth in 1832, and died in 1853, aged 67. So there we have it, not only did the region make the rails, chains, rivets, nuts and bolts, and the boilers that drove steam power onwards, it was at the very forefront of technological developement's as well. We need to fly the flag a bit more often, just like in the last picture for this page, which was painted in 1916, and the fact that the Americans had a replica built of the old engine in 1932. Non of the other engines survived, not even as little bits, they seem to have been broken up and used as spares, or as stationary engines. By the 1850s, the Stourbridge Lion was in a sorry state, only it's boiler and walking bars were intact. In 1883, it was rescued and put on open display. This was a mistake, as hordes of " Souvenir hunters ", ripped, or chiseled off what remained, just leaving the boiler. What was left was then moved to the Smithsonion Musuem where it can still be seen. As for the replica, it resides in a little Museum in Honesdale, Pennsylvania, near the spot where the Stourbridge Lion made a little bit of Black Country history. 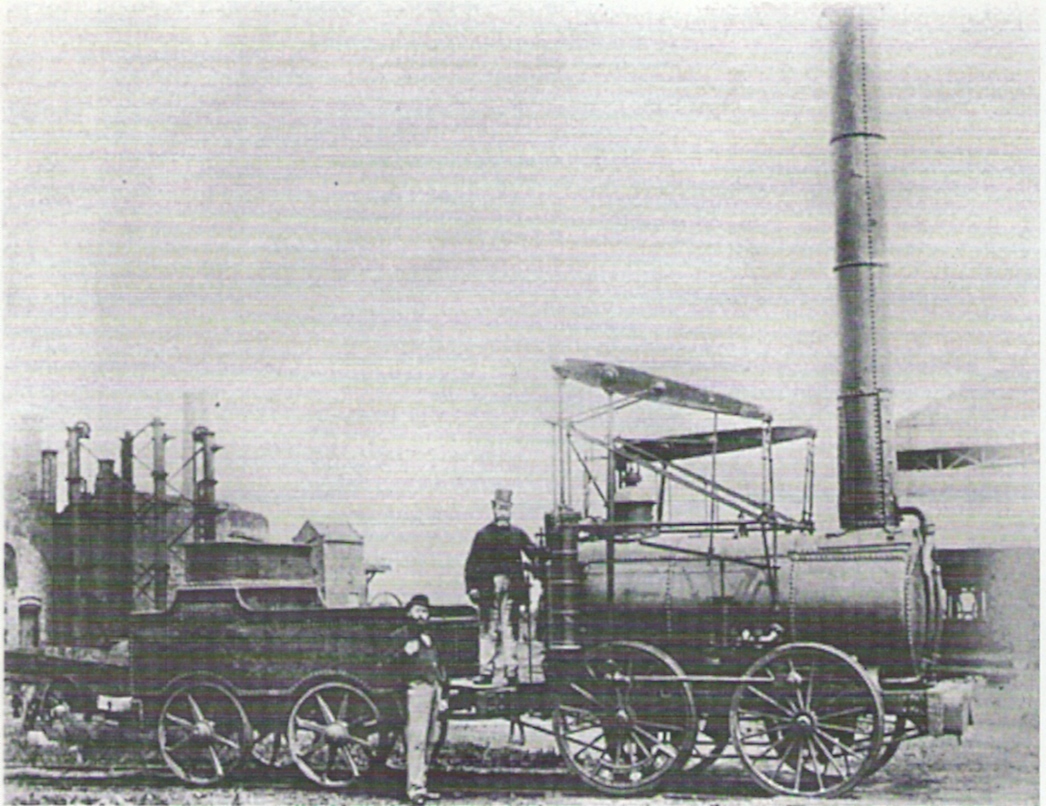 The Agenoria, pictured in the 1860s, and looking remarkable similar to the Lithograph and Painting above.