COAL, AND THE COAL MASTERS.

I gave a great deal of thought to the title of the heading of this page. For almost two hundred and thirty years, mining was a staple of the region. Other activities, such as hand made chainmaking, only took off about 1830, and was almost gone by 1912, to become the preserve of the bigger companies. Just like the Nail and Chainmasters, the Coal Barons were the one's who became rich. To be honest, they had been around longer, and had a great deal more practice and experience at the explotation game. So who were they, these bloated parasites of the coalfields, were did they come from, and just how much did they own? 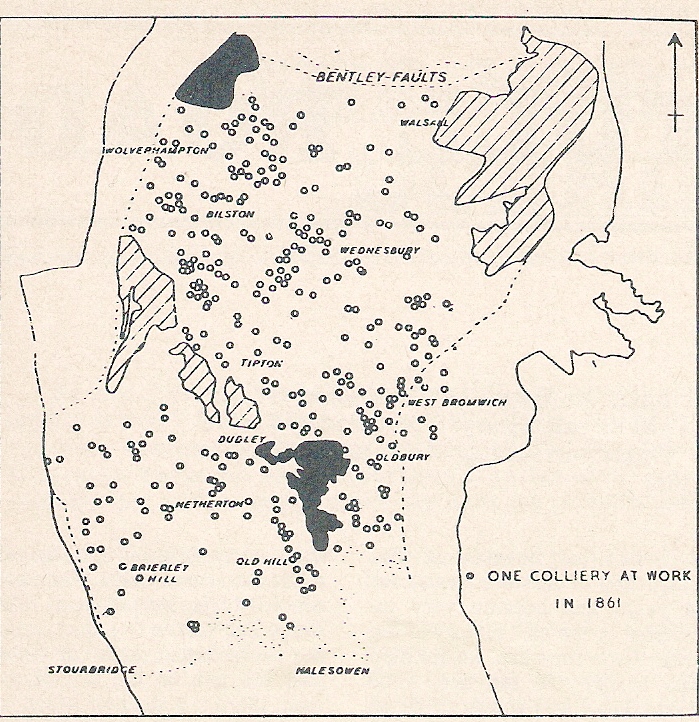 This is a Map, showing not just the extent of the Coalfield, but an indication of just how many Mines had sprung up. The close proximity of so much frantic digging, was bound to cause problems, and so it proved. The document has been drawn by hand, and as you can see, not as accurate as would be liked, but there is no doubt that the artist was not mistaken when he put all the little circles on it. He was, if anything, erring a bit towards the side of caution. 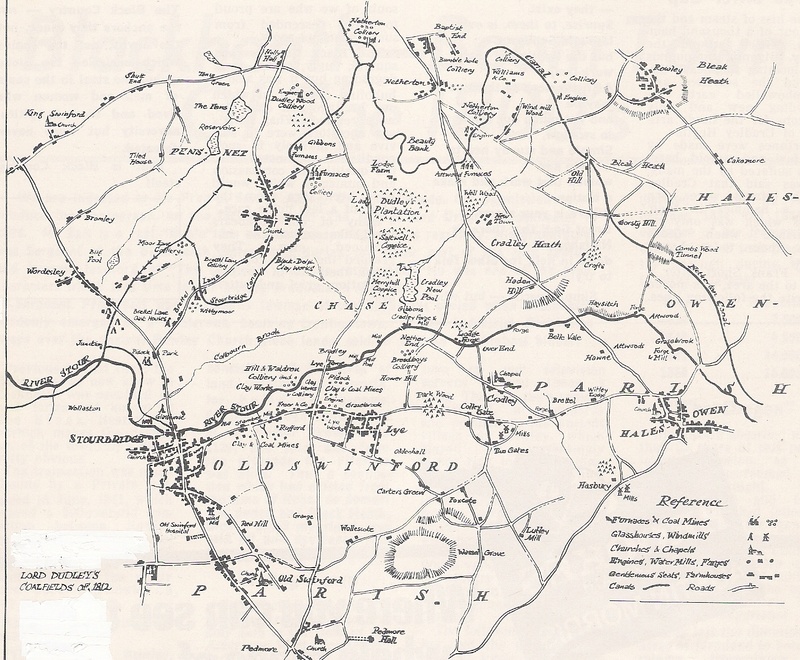 This Map was prepared for Lord Dudley in 1812. It shows the extent of the land, resources, and mines he owned at the time. Not only mines, but Mills, Forges, and Woodland that was needed to fuel some of the activities. ( Charcole was a prime fuel ) The Earl however, did not manage all the mines. He did though, employ Engineers like Higgs and Minton, to sink shafts in likely places, build a ramshackle Pit Head, and then lease it out to a "Coalmaster ", or " Charter Master ". The Earl, of course, took a hefty chunk of the profits of extraction from the ground, as well as rent for the mine. His Bailiffs were everywhere, counting each tub of coal as it came out. The Coalmasters, in order to make a profit, in turn, paid low wages, had bullying managers, and cut corners on safety. There are very few records, of any of them ever being prosecuted when lives were lost. Most of the mines were short lived affairs, and the names of owners and 'managers' are lost in the mist's of time. Some have though survived, and in answer to several questions on the subject, this is what I have " dug up ".

Most of them, paid low wages, provided terrible working conditions, allowed children as young as 8 to work underground, operated a " Tommy Shop ", paid no compensation for injury or death, and, when visited by mine Inspectors, hid, or destroyed records. Some of them were responsible for the worst mining accidents in the Black Country, so please forgive me if I sound a little underwhelmed, at their achievements. Still, no good hiding from the truth is there, history being what it is, and as they say, " it all comes out in the wash ".  We have a fairly extensive history of most of the Black Country Mining tradgedys, and you will need at times, to make use of the search box. You can find a lot more names and Mining history, in the various topics, in the Black Country Mining sections of the forums.

You can find much more in the " Mining History " topics, on the Forum.

The Chainmakers of Cradley.
by Rankle search 5 months ago

Stagecoaches.
by Irvine 6 months ago
More...